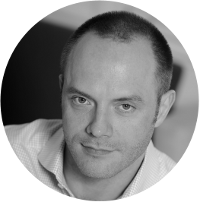 An unbeatable price/availability ratio
for our backups outside of Belgium


"An unbeatable price/availability ratio for our backups outside of Belgium"

"A Kimsufi server is perfect for experimenting... and even for getting started in gaming!" 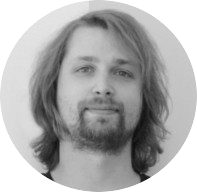 Hello Sébastien. How does the Soundytics solution work and who is it for?

We've developed a technology that can analyse the DNA of a sound signal. From a sample of music, we can extract 15 acoustic criteria, which we can combine with more than 30 editorial and social data, such as popularity of the song title, country of origin, release date and music genre.

We’ve analysed and enhanced 8 million musical titles, and we predict that this number will reach 20 million by the beginning of November. From all this data, we’ve created a range of solutions. Firstly, our programming interface (API) for streaming platforms and music publishers makes it possible to analyse a title and find similar titles in a music catalogue, create advances search engines (you can search for Rock/from 1980/English/fast tempo/“Happy” mood, etc.), or even to offer automatic smart radios, e.g. a “relaxation” radio with criteria such as jazz/slow tempo/“sad” mood. In addition, we’re creating interfaces so that passengers on board a plane or in a car can listen to music with a selection of sounds to suit their mood, their taste or their on-board activity. Lastly, we’re releasing a sound solution for smart and non-physical shops, for sound design adapted to customer behaviour and the company’s identity. Sometime in October, we'll be making our first big contract official. Elsewhere, we’ve developed a mobile application (Soundytics, available on Android and coming soon on iOS) for individuals. The user chooses their activity, and the application suggests a suitable playlist that can be customised by the user (music genre, tempo, mood, release dates, popularity, etc.). This is a free application that's not intended for generating business; in some ways, it's to showcase our solution. 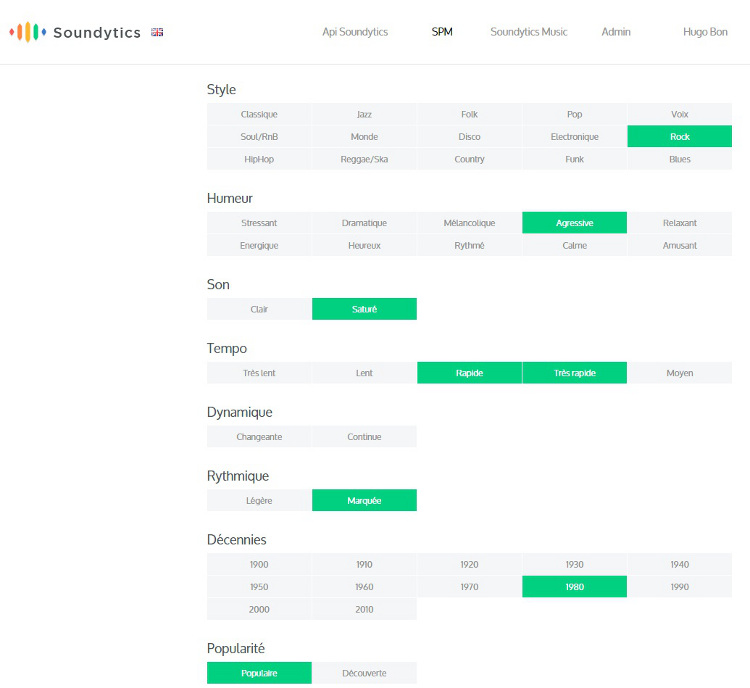 The interface offered to shops to diversify their music line-up.

What kind of infrastructure have you implemented?

We’ve got five OVH servers and six Kimsufi servers. With OVH, we’ve got a cluster of two (soon to be three) machines equipped with SSD disks and packed with RAM, for our SQL database with Percona. The SSD disks offer great I/O performances, and we keep a lot of cache index in the RAM to accelerate requests. Still with OVH, we’ve got a server for analysis equipped with a 32-thread processor, which enables us to extract several pieces of data at the same time. Lastly, we’ve got two 12 TB storage servers with OVH, configured in DRBD (Distributed Replicated Block Device) that we use as a sort of network RAID. These file servers contain images (mainly album covers) as well as the backup of our database.

With Kimsufi, four servers are used for the web front-end and are positioned behind a machine that balances the load (load balancer software based on a round-robin arrangement). We use the last server as a pre-production machine to carry out internal tests before we update our products.

Why did you choose Kimsufi servers for the front-end?

Front-ends host lightweight applications. Also, we chose to use the Kimsufi servers instead of latest generation servers that would have been too big, as Kimsufi's moderate power can be forgiven for its unbeatable price. With a pool of four web servers behind the load balancer, the infrastructure is resilient and offers high availability. In the event of hardware issue on a machine, the load balancer redirects requests to the three working servers.

Broadly speaking, why do you work with OVH?

To be honest, when we released the Soundytics project, we didn't even think about looking anywhere else. We launched another entrepeneurial project with my partner (Hugo Bon), who also hosted with OVH. I've been using your services for so long that I can't remember how I found out about you! For whatever the reason, OVH and its various brands (OVH, So you Start, Kimsufi) stand out for their excellent value for money. For a startup with a limited budget, this is evidently a huge bonus! 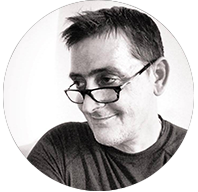 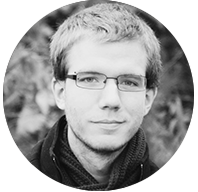 What type of projects does Nephila Studio work on?

Our customers are largely micro-businesses. Our live deployments are essentially WordPress (showcase sites) and PrestaShop (e-commerce sites), such as nailangel.fr, boulevard-dore.fr, caracole.fr...

How do you host your pre-production and live environments?

We started using the services of OVH in 2009, especially shared hosting (which became web hosting, Ed), which we are gradually leaving behind. We discovered Kimsufi via the OVH website and we quickly became users in 2012. Our pre-production is now handled by Kimsufi (on Ubuntu server), whereas we divide up the resources of a So you Start server to host our customers' websites.

Which Kimsufi server have you chosen?

We changed model last month to get a higher performance machine - the KS3 (8 GB/1 TB/Core i-3). The 2 GB model that we were renting before was no longer sufficient for the number of projects that we're hosting.

Why did you choose Kimsufi? What are the benefits of Kimsufi in your opinion?

Kimsufi has no direct competitor. I can't find the same compromise anywhere else, allowing you to have a dedicated machine at such a low price by getting rid of all options and surplus services.
The service won't support any live project, but it does support development projects fantastically.

Obviously we work locally, but we'd like our customers to be able to monitor their projects. That's what makes Kimsufi ideal - putting test or follow-up projects online, without deploying a production server.

We also installed on Subversion (SVN) server on the same machine for internal collaborative work.

Finally, we're planing to install a second Kimsufi server for offering our e-commerce customers development shops to optimise the maintenance of their websites.

The only regret I have is having to differentiate between customer accounts on OVH, Kimsufi and So you Start. One administration interface would be more practical when you're managing multiple projects.

Multimedia server, development forge and photo storage:
Martin, a 5th year student at EPITECH, tells us how he uses his Kimsufi

Why did you choose a Kimsufi server?

After testing out the server at home (i.e. an old PC hosted in my bedroom), I opted for a VPS. It's an inexpensive solution but it does have limitations. The choice of OS is often limited because it's restricted by the virtualization technologies used to generate the VPSs.

At that time, I wanted an Arch Linux server; a pre-installed distribution available on Kimsufi.

Financially, I don't have the means nor the need to rent a dedicated server for a costly montly price.

With Kimsufi, I found a 4-thread machine for €8.50 per month (PS-4 AtomTM 330 2c/4t 1.6 GHz+ 2 GB of RAM, 500 GB of disk space, with 100 Mbps guaranteed bandwidth). Without this unique offer, I'd still be throwing things together with different services...
It was the value for money that enticed me.
A reason that naturally leads us to the services offered by the OVH group.

What do you use your Kimsufi server for?

My Kimsufi is versatile. On one hand, I use it as a multimedia server using Plex Media Server (based on XBMC). I store my personal video and music library on it and I can access it from anywhere.

On the other hand, my Kimsufi is my development framework under GitLab. I also backup on my Kimsufi (mainly photos which are duplicated on hubiC), and it also serves as secondary development environment for coding when I’m away from home

How do you feel after using it for a few weeks?

My Kimsufi server is robust. The quality of service meets expectations (uptime, speed of access). I don’t need more advanced support. By opting for a dedicated server, I wanted to have full control.
That’s what I've got and I'm happy!

Get the latest news on Made in Kimsufi innovations, ask the community for advice and post your feedback on your server usage.

To guarantee the best prices, Kimsufi has chosen to only keep the essential components and services. Kimsufi are now sold directly and via thousands of resellers over 5 continents.

Kimsufi servers benefit from OVH data centres located in North America and Europe, as well as the hosting provider's own global fibre-optic network with anti-DDoS technology. The Kimsufi quality of service is approved by thousands of users.

with Failover IP, Windows licences , advanced support or even vRack*(private network between your servers).